Six Ways to Make the Most of Oahu, Hawaii 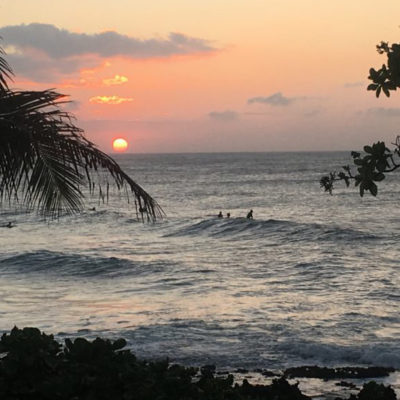 Until recently, vacationing in Hawaii had never been an option, having grown up on the East Coast with family in Europe. I’d always thought of the rainbow state as an extension of the US, a few hours beyond California. I did not realize how exotic Hawaii is for us “mainlanders”. 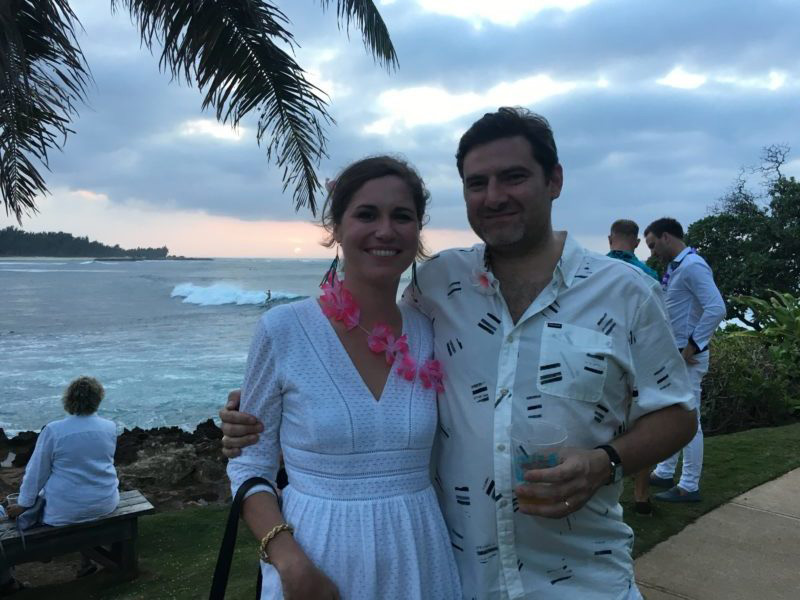 I admittedly knew very little about Hawaii, so when we had the excuse to spend a few days there for a wedding, we jumped at the opportunity. Not only would this be a unique chance to get some vitamin D before winter truly settled into my current home of Chicago, but, as I boarded the plane, the traveler in me got excite about discovering this part of the world I had never set foot in before. Chicago to Honolulu is a whopping 9.5-hour direct flight. As we took off, I told my French husband, “It’s literally faster to fly to Paris than to Honolulu!”

Indeed, not only is Hawaii far, but when we got there I felt like I was in a completely different country. We were there after all for a wedding of a half Australian, half Ecuadorian couple now living in Australia. Hawaii had seemed like a fair midpoint. From Honolulu, the flight to Sydney is 10 hours and only seven to Japan.

We only had 4.5 days there — a long way to travel for so little time — so we chose to stay on the island Oahu, where the majority of Hawaiians live and where the wedding took place. Since this island is considered the most touristy, I did not expect to have such an authentic experience and to be so blown away by the relaxed Hawaiian culture. The entire time I was there, I kept thinking, “This cannot be the last time we come here.” Here were a few highlights:

1. Visiting the Iolani Palace in Honolulu 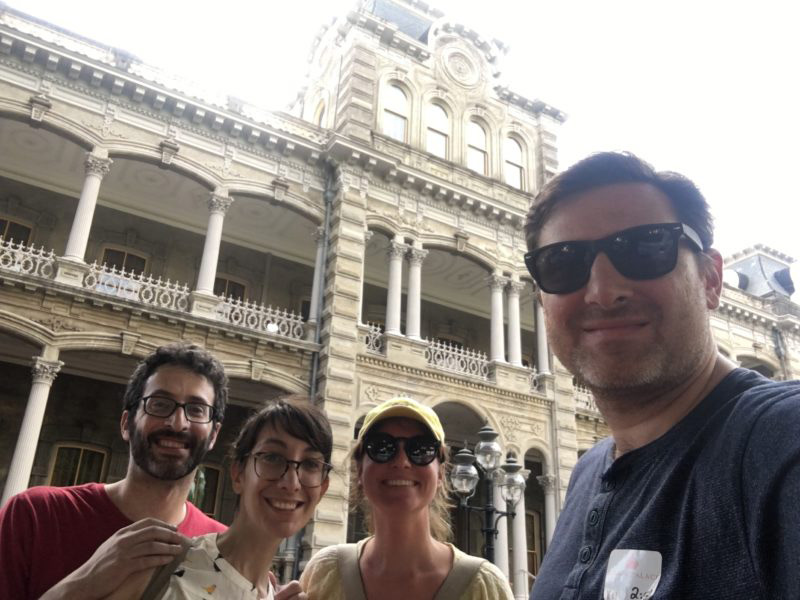 This is the only royal palace in the United States. Americans learn very little about Hawaii in school, but Hawaii was once a very civilized kingdom in the middle of the Pacific visited by royalty from around the world. The United States effectively stole the kingdom at the end of the 19th century.

This visit was the first thing we did when getting off the plane. We knew we wouldn’t have time to return to Honolulu, so we wanted to get our culture fix in straight away. It was a great way of getting to the heart of what Hawaii was all about before the Americans took over and certainly provided a good lens for us to understand the people of Hawaii.

2. Taking a surf lesson on the North Shore 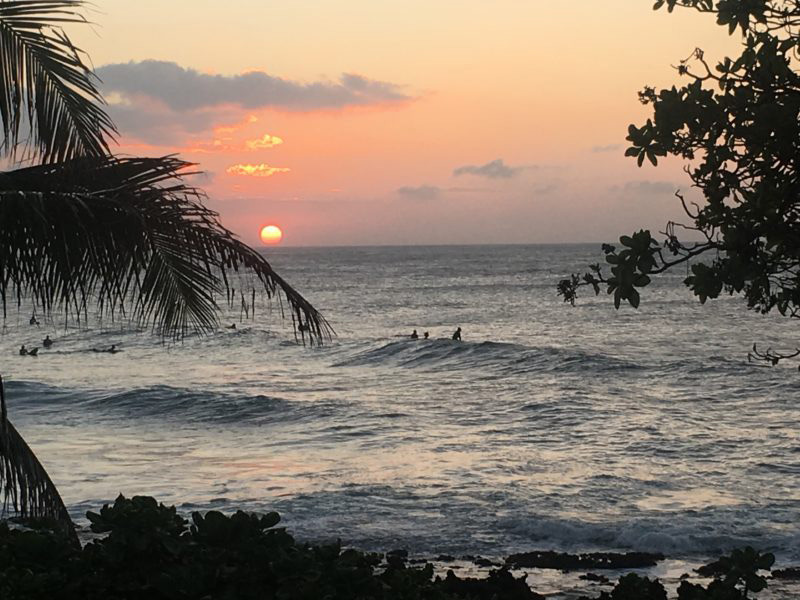 This is probably more well known, but did you know that Oahu’s North Shore is the mecca for surfing? It pretty much all started here in the 50s and, today, surfers flock to this place from around the globe to surf the world’s best and most famous waves.

The surfing season is between November and March — right when weather is at its worst for most of us — so it’s the perfect time to go. If you’ve ever wanted to try surfing, this is the place to learn.

3. Drive around the coast of the island and go beach hopping 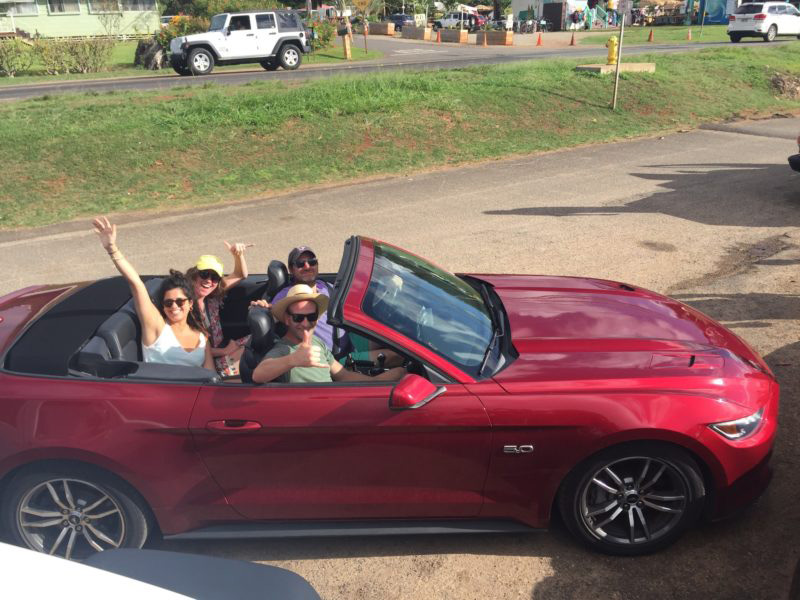 On the first morning we arrived, we asked a local what beach she recommended. At first I read her hesitation as a sign that it was hard to find a nice beach. I soon realized she hesitated because literally every beach was amazing and it was hard to choose the best one. 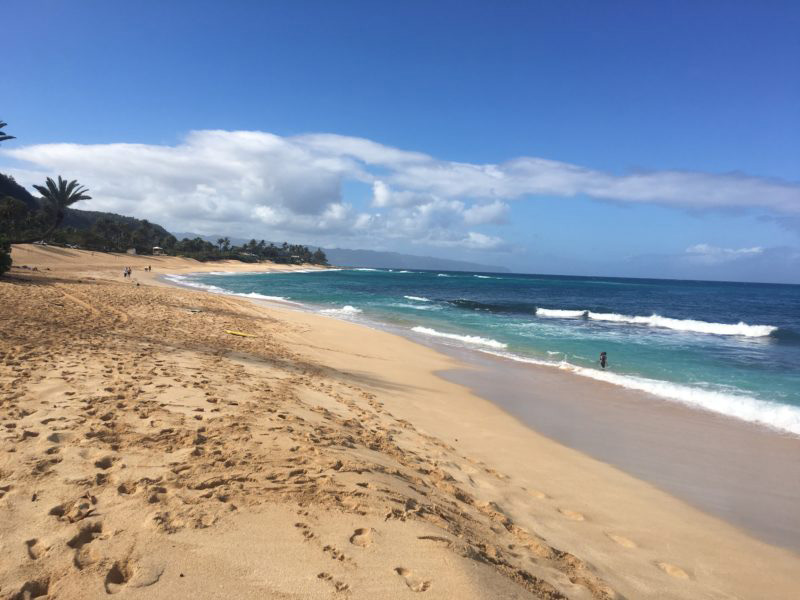 We tested all the legendary beaches on the North Shore (Sunset Beach, Banzai Pipeline, Kawela Bay, Waimea). Not only are these sandy beaches stunning, but they are also where you will spot world famous waves. Do be careful about swimming, as the current is strong. We managed to swim in the waves, but it did take a bit of getting used to. On one day, the conditions were such that a sand bar was formed creating natural swimming pools for us to swim in. It was one of the most stunning moments of the entire trip. 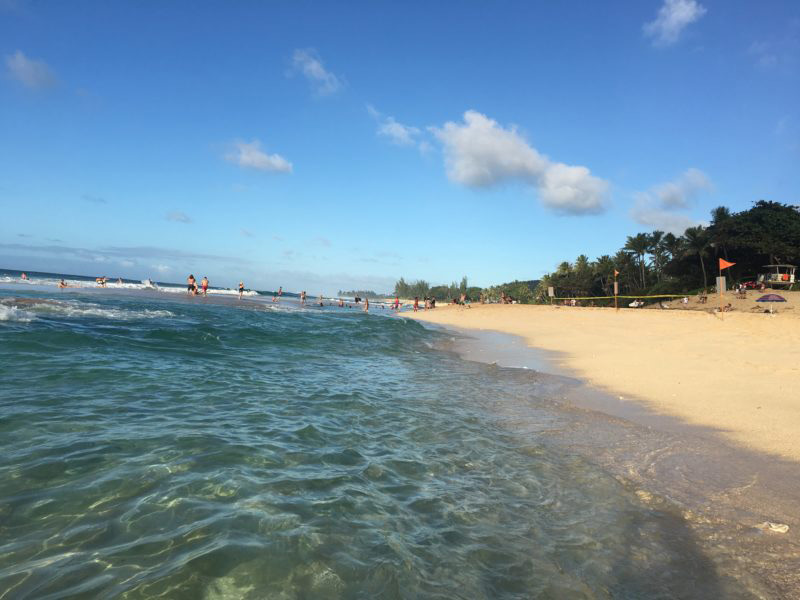 But aside from these beaches, when we drove to the east coast of the island, I spotted numerous lovely beaches I would have loved to try out had we had enough time.

4. Watch the sunset off the North Shore 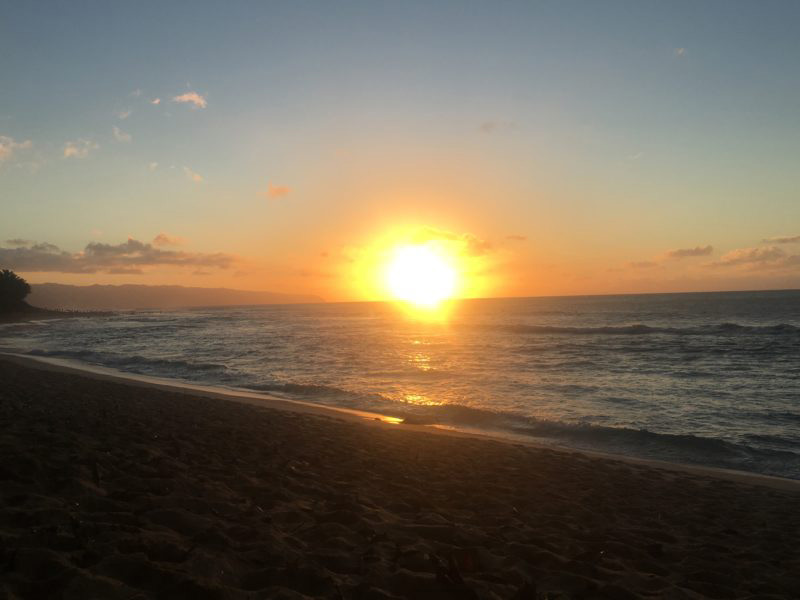 There are few more stunning sunsets than the sunset over the Pacific ocean from Hawaii. Every evening, we made sure not to miss it. We got a beautiful glimpse of the sun setting at the wedding itself at Turtle Bay Resort and another time at the appropriately named Sunset beach. 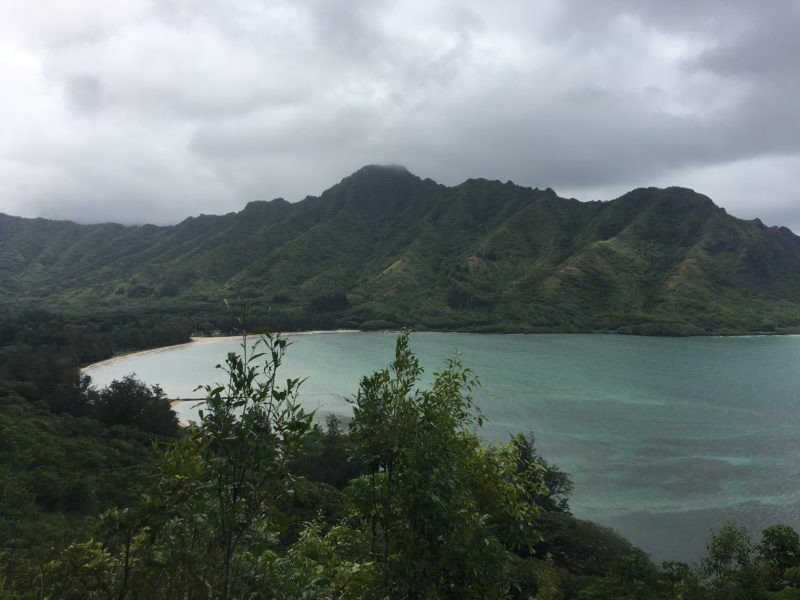 Hawaii is not only about the ocean and beaches. These volcanic islands lend themselves for some stunning scenery to be seen all around.

We chose to hike up the “Crouching Lions” trail. It was hard to find the entrance, but once we found our way to the top we were in awe at the beauty surrounding us.

6. Go eat out of the food trucks 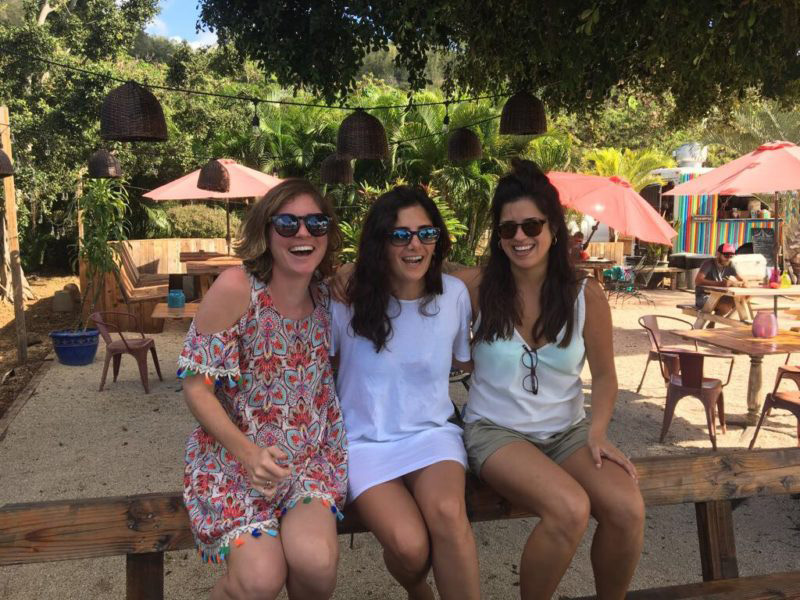 One thing I loved about being on Oahu was that we were surrounding by so many people who call this island home. One thing the locals will tell you to do is taste the delicious seafood. Aside from the food at the wedding, we only ate out of the food trucks that the locals recommended. 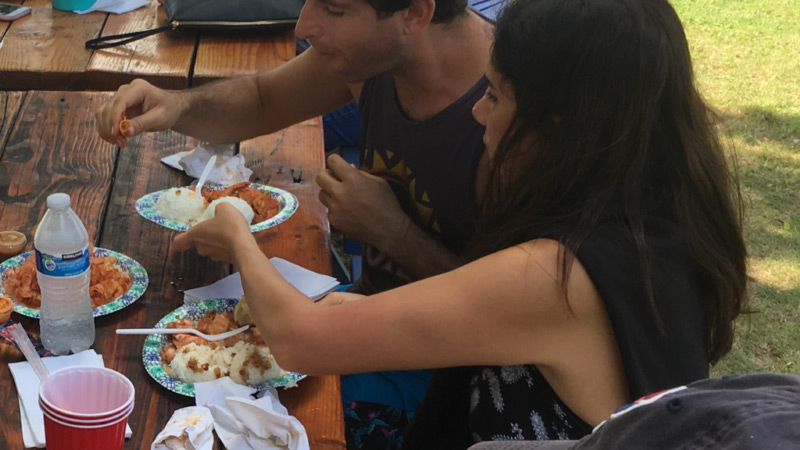 The two that stood out for me are Giovanni’s Shrimp Truck — a local favorite and worth every minute of the wait, and Aji Limo Truck — a delicious menu of ceviche, poke, and other types of fresh fish.

All in all, our 4.5 days in Oahu were total bliss. We will make sure to return to this stunning island in the middle of the Pacific and perhaps next time venture onto new islands. I hear particularly great things of Kawaii.