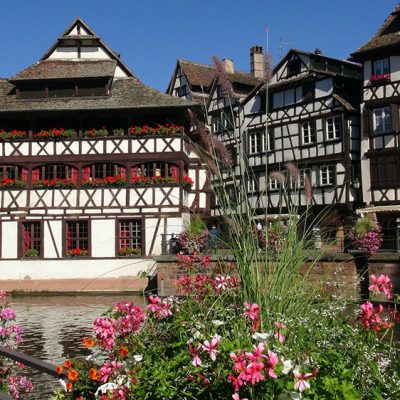 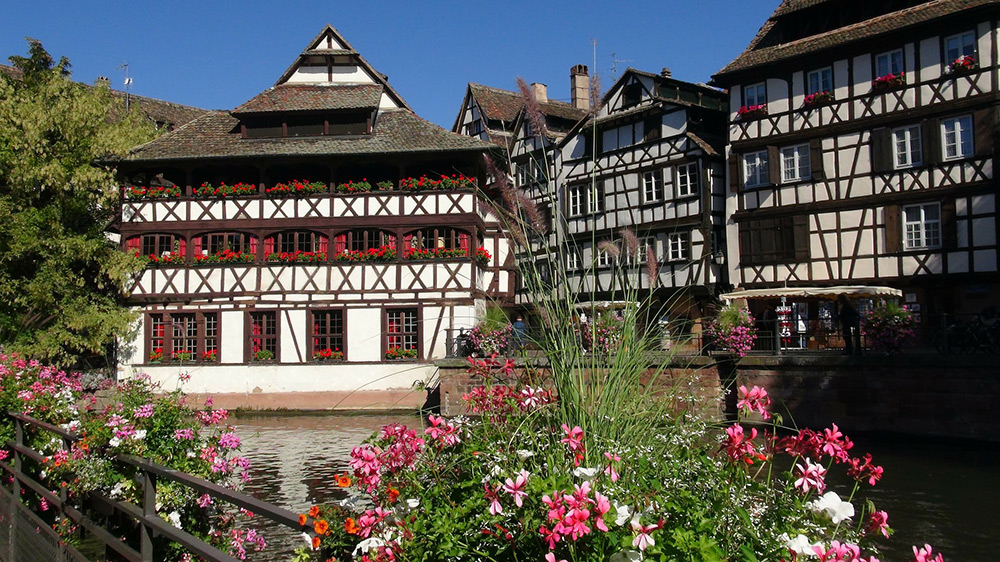 ALSACE has a unique place in the history books. Often central to historical events, it has been the subject of numerous conflicts as was the case in the war of 1870 in addition to the first and second world wars. A number of sites and landscapes constitute permanent reminders of the trouble past. In Alsace, heritage is alive and waiting to be discovered.

With its ideal climate and superb geography, Alsace offers a generous and abundant natural environment. Its regional nature parks and nature reserves offer a host of rural landscapes very different from those you would have expected.

The Alsatian art of living includes a generous sense of hospitality to the table and the magic of the wine route. Widely recognized for its wine and cuisine, take the time to discover its gastronomy (three starred Michelin restaurants) and visit its wine cellars along the wine route. From Than to Marlenheim, the Alsatian wine route passes through a string of picturesque villages in bloom or well-known wine producing towns, and offers breathtaking views illustrating the richness and diversity of the Alsatian landscapes.

Alsace is made of timeless villages and castles. The castle and fortified route include Alsace’s most emblematic sites such as le Haut-Koenigsbourg, the volerie des Aigles, the villages of Ribeauvillé, Ricquewhir, Kaysersberg where Albert Schweitzer was born in 1875

Strasbourg, the European Capital and Capital of Alsace, is home to the world-renowned historical heritage, marked by its history, profoundly bicultural. The city center is home to the main sites and monuments which make Strasbourg so famous, including the cathedral, the Maison Kammerzell, petite France or the Ponts couverts… In a subtle blend of tradition and modernity, historical monuments now stand alongside the most modern structures.

Colmar, Alsace’s Capital of wine with its historical center and the famous “petite Venise”, the Unterlinden Museum and the Bartholdi Museum. Auguste Bartholdi, father of the statue of Liberty, the most famous artist of Alsace of the 19th century, was born in Colmar in 1834

Mulhouse, renowned for its rich industrial past and its successful adaptation to the modern day. The saga of the textile industry in Mulhouse began in 1746 and fabric printing contributed to the growth of the city throughout the 18th century. By the 19th century Mulhouse and Alsace had become world leaders in the printed textile market! In 1833, a group of textile manufacturers based in and around Mulhouse formed an Industrial Society known as the “Societé Industrielle”. They decided to collectively archive the designs they produced. In order to complement their own personal collection, they added designs from other countries, and from earlier times. This collection grew in importance to become what is today the premier collection of printed textiles in the world…

The Cité de l’Automobile, the most extraordinary vintage collection in the world, presents the world’s leading collection of cars. Come over to admire the marvelous Bugatti Royale, the Rolls Royces and Ferraris! Discover the cars that made history and experience the collection in an entertaining and interactive surrounding

The Railway Museum, the biggest train collection in Europe, Explore two centuries of rail history at Europe’s largest railway museum. There’s a vast collection of trains, the average exhibit is around 25m long and weighs a whopping 80 tons. Trains on display date from 1844, the start of rail travel in France, to the introduction of TGV – high speed trains. 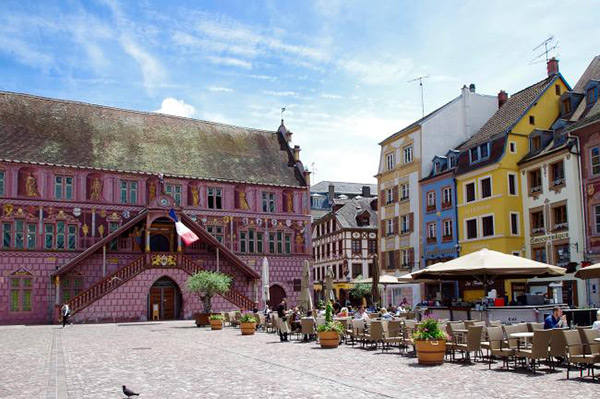 Between the Rhine and the mountains, the Alsatian Wine Route is a slender strip stretching over 170 kilometers through 120 towns and typical Alsatian villages. It is a really nice way to enjoy cycling in Alsace as roads are adapted to bike tours. The city of Colmar is at the heart of this route and is surrounded by beautiful small picturesque villages. You will be able to discover many wineries, to meet winemakers and visit the most beautiful villages of Alsace with flowery streets and half-timbered houses. You can discover the Alsace Wine Route by bike, rollerblade, foot, scooter…The Alsace Wine Route, famous for its wine and beautiful villages, is actually the oldest wine route in France, leaving from the very north of the Alsatian vineyard, Marlenheim to the very South, Than.

On the Alsace Wine Route

Ribeauvillé, is probably one of the most famous villages on the Alsace Wine Route it’s a beautiful place! Ribeauvillé has preserved several vestiges of its ancient ramparts and one can still admire several towers like those of Storks of the XIVth century or Butchers between the Average city and the Old city. You can admire them as you go along the medieval streets of Ribeauvillé.

A wine festival takes place in July to discover the great wines of Ribeauvillé. 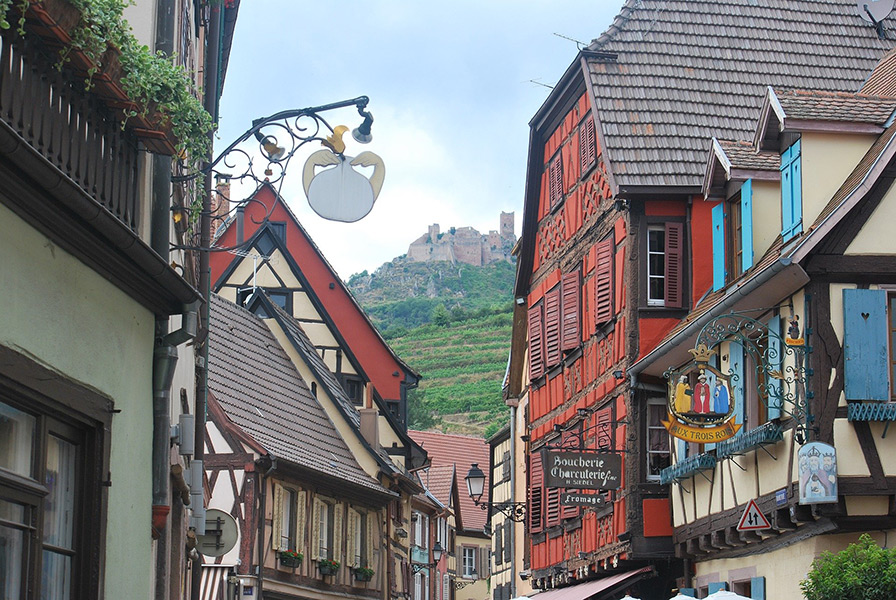 This village is an essential place to visit while in the vineyards of Alsace for its superb architectural heritage: narrow paved streets, old timber-framed houses, Rhenish Renaissance town hall, ruin of a 13th-century castle overlooking the village and a 16th-century fortified bridge offering a beautiful view of the river. The Christmas market in Kaysersberg is well-known for its authentic character. Kaysersberg is the native town of Albert Schweitzer

Doctor Schweitzer was an organ player, a musicologist, a writer, a minister and a doctor. In Africa, he led an exemplary battle against underdevelopment and illness. He died in 1965, at Lambaréné in Gabon, where he had founded a hospital and where his «living work» continues today. Located next to the house where he was born, the Albert Schweitzer museum exhibits documents, photographs, personal objects and souvenirs which retraces his life. Albert Schweitzer (1875-1965) was an Alsatian-German religious philosopher, musicologist, and medical missionary in Africa. He was known especially for founding the Schweitzer Hospital, which provided unprecedented medical care for the natives of Lambaréné in Gabon.

Albert Schweitzer received his Nobel Prize one year later, in 1953.

Riquewihr is an old fortified town at the heart of the Alsatian vineyard. Inside the fortifications, you will find the pedestrian center, where it is actually very nice to walk around.
It is a typical and pretty Alsatian village, half-timbered houses, fortified walls, gateway doors, cobbled streets… Riquewihr is probably what you dreamt Alsace to be.

Visit the Hansi Museum, dedicated to a famous Alsatian drawer; its drawings, are part of the Alsatian popular imagery that you can find everywhere.

Riquewihr is located close to famous vineyards. Some very famous wineries are available to welcome you and make you spend an unforgettable moment. These winemakers produce some grand cru wines, from gewurztraminer, riesling or pinot gris grape varieties.

Eguisheim draws its title of glory from its architectural ensemble, preserved from the ravages of history. Built around its castle, this medieval city unfolds in concentric circles. You will discover in this original village, fountains, colongereal courtyards and a church sheltering a 13th century “Opening Virgin”.

Thanks to the skill of Eguisheim’s wine producers, the remarkable vineyards and an exceptional microclimate, the “Eichberg” and “Pfersigberg” have been classified as two of Alsace’s Grand Cru slopes.

In Alsace, the art of eating is something to be taken seriously! Alsatians have a taste for good things, and they enjoy sharing the experience! Gastronomy is a well-established tradition. Taste our numerous specialties! From the traditional winstubs to prestigious starred restaurants, the Alsatian cuisine is generous, traditional or inventive and always delicious. The Wines offer an incredible range of flavors and aromas.

In the constellation of restaurants in Alsace, some outshine with their excellence and culinary talent! In Alsace, about thirty Michelin-starred chefs surprise and delight their guests, working wonders with Alsatian gastronomy, each more creative than the next.

The World’s best Pastry Chef 2016 is from Ribeauvillé.